We are counting down to the deadline for the Teen Video Challenge.  Videos will need to be submitted by March 11th. The winning video earns the kids $150.00 and their public library receives $50 worth of merchandise from CSLP and Upstart.

Find information and forms at www.wyominglibraries.org/teenvideochallenge.html.

Please contact Chris Van Burgh at  chris.vanburgh@wyo.gov or 307-777-3642 with any questions or to let her know if you are working with teens who plan to submit a video.

Planning for a building project? Library Journal’s Design Institute is a one-day think tank that brings librarians together with leading architects, designers, and product vendors for a day of presentations, interactive discussions, and innovative problem-solving on library space, design, and construction. The event will be held at the Bozeman Public Library in Bozeman, Montana on May 6, 2016 with a half-day tour of local libraries the afternoon of May 5. Registration is free and open only to librarians and their city planners.

Registrants are invited to submit real-life design challenges. Each submission is vetted and reviewed by Library Journal, and then each sponsoring architect selects their top choice of design challenge to take on. The architect and library then work together to create a breakout session to be held onsite at the event. Even if a library’s submission is not selected, Design Institute affords every attendee the opportunity to have face-to-face time with the architects and product vendors to discuss their challenge needs.

See more about the event, including the full list of sponsors and program at lj.libraryjournal.com/designinstitute.

With the passage of the Every Student Succeeds Act in December, library media specialists may be asking how it affects them. According to School Library Journal, the legislation is the first in 50 years to provide revenue for school libraries in support of services and resources.

The outcome may not be seen for some time, but school librarians may be interested in both learning more about it and in what steps they can take to advocate for their own library. Some recommended reading:

The Wyoming State Library maintains a collection of library science materials available to you at WSL or through interlibrary loan. Some titles of interest for school library advocacy include:

Find more titles from our collection in WYLDCAT, or check out our Pinterest boards. Questions? Contact Paige Bredenkamp, WSL school library consultant, at paige.bredenkamp@wyo.gov or 777-6331.

Welcome to the Wyoming State Library’s Training Calendar. These are free, online events. You can subscribe to it and view the events in your calendar software or find all the events here at: WyomingLibraries.org/calendar. 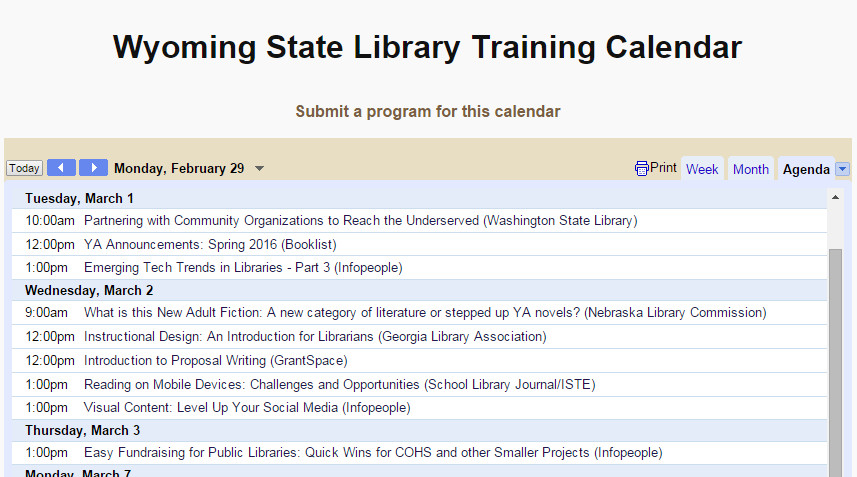 The 2015-16 Wyoming School Library Survey is now open through March 31 for data collection. This survey provides valuable information about the state of Wyoming’s school libraries that is not available elsewhere, and has been successful due to the work of teacher-librarians and library paraprofessionals who participate. Data from prior years may be found on the Wyoming State Library’s statistics page.

The main contact for each school library has been sent a username and password. Those who did not receive theirs should contact Thomas Ivie at thomas.ivie@wyo.gov or 307-777-6330. A help page is available. Please contact Thomas with any questions about the survey.

Archived webinars on delivering community value, customer service, makerspaces, marketing and outreach, and fundraising may be found at lj.libraryjournal.com/webcasts/best-practices-from-americas-best-small-libraries.

Upcoming sessions are in the works for data and assessment, construction and renovation, solo librarianship, technology, and professional development.

In this webinar we will explore National Geographic Kids, Explora Primary, Kids InfoBits, Britannica, and Middle Search, Research In Context and Bookflix.

Can’t access YouTube? Find an alternate video link on our webinar archive page, along with links to many more recorded training videos.

Dr. Carla D. Hayden is CEO of the Enoch Pratt Free Library in Baltimore, Maryland, a position she has held since 1993.  Dr. Hayden was nominated by President Obama to be a member of the National Museum and Library Services Board in January 2010 and was confirmed by the Senate in June 2010.  Prior to joining the Pratt Library, Dr. Hayden was Deputy Commissioner and Chief Librarian of the Chicago Public Library from 1991 to 1993.  She was an Assistant Professor for Library and Information Science at the University of Pittsburgh from 1987 to 1991.  Dr. Hayden was Library Services Coordinator for the Museum of Science and Industry in Chicago from 1982 to 1987.  She began her career with the Chicago Public Library as the Young Adult Services Coordinator from 1979 to 1982 and as a Library Associate and Children’s Librarian from 1973 to 1979.  Dr. Hayden was President of the American Library Association from 2003 to 2004.  In 1995, she was the first African American to receive Library Journal’s Librarian of the Year Award in recognition of her outreach services at the Pratt Library, which included an afterschool center for Baltimore teens offering homework assistance and college and career counseling.  Dr. Hayden received a B.A. from Roosevelt University and an M.A. and Ph.D. from the Graduate Library School of the University of Chicago.

President Obama said, “Michelle and I have known Dr. Carla Hayden for a long time, since her days working at the Chicago Public Library, and I am proud to nominate her to lead our nation’s oldest federal institution as our 14th Librarian of Congress. Dr. Hayden has devoted her career to modernizing libraries so that everyone can participate in today’s digital culture. She has the proven experience, dedication, and deep knowledge of our nation’s libraries to serve our country well and that’s why I look forward to working with her in the months ahead. If confirmed, Dr. Hayden would be the first woman and the first African American to hold the position – both of which are long overdue.”

Teen Tech Week is coming up March 6-12, 2016, with the theme “Create it at your library.” TTW is an opportunity for libraries make the time to showcase all of the great digital resources and services that are available to help teens succeed in school and prepare for college and 21st century careers.

An initiative of the Young Adult Library Services Association (YALSA), TTW is held annually during the second week of March. The event is aimed at teens, their parents, educators and other concerned adults and is intended to ensure that teens are competent and ethical users of technologies, especially those that are offered through libraries such as DVDs, databases, audiobooks, and videogames. Teen Tech Week encourages teens to use libraries’ nonprint resources for education and recreation, and to recognize that librarians are qualified, trusted professionals in the field of information technology.

Are you celebrating Teen Tech Week? It’s not too late to join in. Learn more and find great activities at teentechweek.ning.com.

The Public Library Association (PLA) is now accepting proposals for five-minute Spark Talks at the PLA 2016 Conference. Spark Talks use a combination of innovative slides and lightning-fast talk to share work-inspired, personal passions that will fire-up an audience of public library colleagues.

Proposals are due by 11:59 PM Eastern on Friday, March 18, and selections will be announced on March 25. Proposals will be selected by members of the PLA Conference Program Subcommittee based on innovation, clarity, and overall potential for public libraries.

This year the PLA conference is close to home in Denver, Colorado. Learn more at www.placonference.org.