The online Library Campaign Training Institute focuses on how to create, market, and implement an effective advocacy campaign for your library. All five sessions are free and offered online between July 14 and August 4. This webinar series is presented by the ALA Office for Library Advocacy and co-sponsored by United for Libraries and the ALA Chapter Relations Office.

Registration is mandatory, and “seats” in the virtual room are first-come, first serve. All sessions will be recorded and archived for future viewing; registrants will be sent a link after each session to watch the recorded webinar. Register for each session separately.

This workshop makes the connection between program and services outreach and building a library’s base of support for advocacy.  This workshop details:

Register for Part 1 at ala.adobeconnect.com/e237rpvpkjb/event/registration.html

This workshop provides participants with the knowledge needed to:

Register for Part 2 at ala.adobeconnect.com/e3l3fk4nzyp/event/registration.html

Register for Part 3 at ala.adobeconnect.com/e8gwutbl7gb/event/registration.html

Part 4: Connecting with YES Voters and Part 5: Get out the Vote (offered back to back) – August 4, 11:00 a.m. MDT
The Part 4 workshop details the nuts and bolts of a library field operation including:

The final workshop brings the previous four together with the ultimate goal of reaching out to Yes voters and getting them to the polls.

Register for Parts 4 and 5 at ala.adobeconnect.com/e2mcuzeax0q/event/registration.html

Looking for funds to help with your continuing education? The Wyoming Library Association makes the Nora Van Burgh Professional Development Grant available to Wyoming library employees. The recipient will receive funding assistance to enhance their effectiveness as a library employee through additional educational experience. Applications accepted through July 15.

Pilcrow Rural Public Library Grant
To qualify for the grant, libraries must be located in a rural area, have a limited operating budget, have an active children’s department, and raise $200-$400 through a local sponsor. The Pilcrow Foundation will provide a 2-to-1 match to the libraries that receive a grant for the purchase of up to $1200 worth of new, quality, hardcover children’s books. You can review their criteria, take the eligibility quiz, and apply at http://bit.ly/1UOWPEq. Deadline: October 1

Library of Congress Teaching with Primary Sources (TPS)
The Library of Congress awards grants to school districts, universities, cultural institutions, library systems, and other educational organizations who wish to incorporate TPS’ materials and methods into their existing education and professional development programs for pre and in-service teachers, librarians, media specialists, and other K-12 educators. This program provides assistance and grants of up to $20,000. Eligibility requirements and application forms are accessible on their site: http://bit.ly/1WMz8CW. Deadline: ONGOING 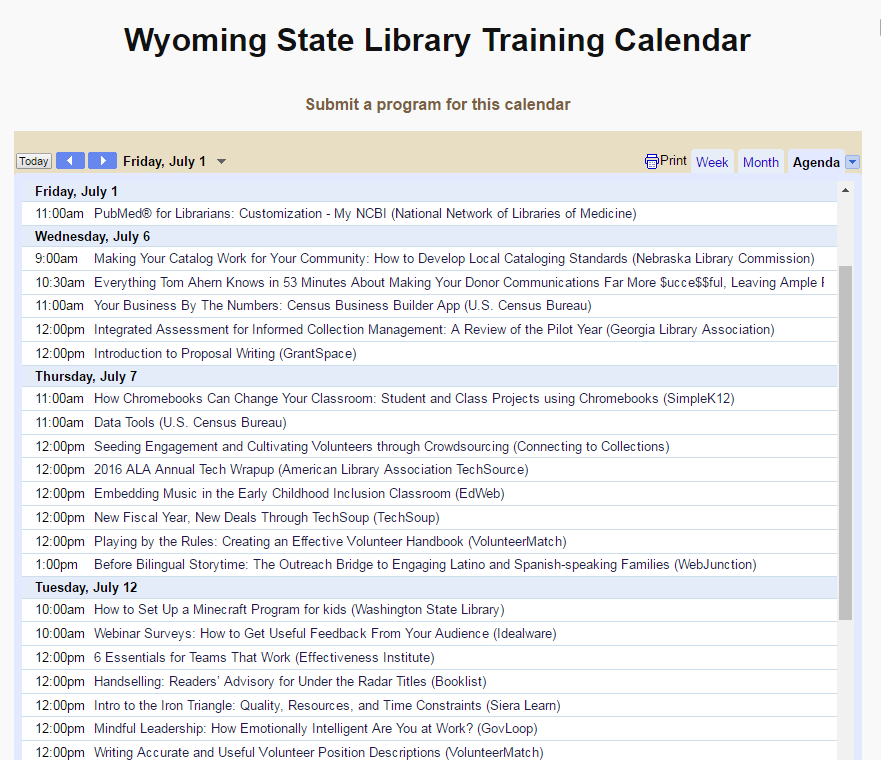 As librarians, we deal with communication technologies in a wide variety of formats, from books to movies and music to the internet. Questions regarding copyright law frequently arise. Giving patrons accurate copyright information can be daunting, as copyright law can be rather confusing and convoluted.

Fortunately there are numerous resources available to guide our copyright questions. Remember, the resources listed here are meant as guidelines and do not replace legal advice. If you have additional questions, feel free to contact me at the Wyoming State Library at karen.kitchens@wyo.gov or (307) 777-7281.

The Copyright Advisory Network (CAN) exists to help librarians understand copyright law and appreciate the important role that we can play in serving the public “to advance the progress of science and the useful arts.”  Post your copyright question to the forum to receive advice from librarians that participate in or are a member of the OITP Copyright Education Committee of ALA.

Copyright Genie helps to discover if a work is covered by U.S. copyright. The Genie calculates the terms of copyright protection and can publish the results as a PDF. This can be useful for record keeping purposes.

The Fair Use Evaluator helps to discover if the use of copyrighted material falls under the fair use doctrine.  The Evaluator helps collect, organize, and archive the information that you may need to support a fair use evaluation. It also publishes a PDF document for record keeping purposes. Additionally, this site provides access to copyright educational materials, other copyright resources, and contact information for copyright help at local and national levels.

Exceptions for Instructors eTool
This tool is intended as a source of information for educators and others to better understand the educational exemptions available in the U.S. Copyright Code. This tool can also help you collect information detailing your educational use and provide you with a summary in PDF format.

Free, online, continuing education events for this week from the Wyoming State Library’s Training Calendar. You can subscribe and view the events in your calendar software, or you can find all the events at WyomingLibraries.org/calendar.

You know that you have to purchase materials to keep your library collection updated and relevant for your school community. With tightening budgets and overwhelming schedules, how do you find the time and money for quality materials that still meet curriculum needs, even as we move towards more robust and active spaces? In this webinar we will look at resources for increasing the collection without breaking the budget or losing relevance. (Alternate video link) June 2016 – 41 minutes
Download PowerPoint slides

While your library foundation might find success in special events and specific appeals, the workhorse of your fundraising is the annual campaign. This is a broad-based appeal, conducted every year, that is your biggest source of unrestricted donations.

Library Strategies has offered these 14 tips on making your annual campaign a success. Read their full blog post for details and for a sample appeal letter. Here’s the short version:

The Sublette County Public Library in Pinedale recently mounted commemorative plaques to the main library and to the addition to the library honoring the contributions of long time director Daphne Platts.

The main library was built in 1998, and the addition was added in 2008. Both buildings were constructed under the leadership of Daphne, who served as director from 1985 to 2010.

Daphne, being the epitome of Southern womanhood, avoided personal recognition and believed that one should be mentioned in the newspaper only on birth, marriage, & death. However, she was greatly beloved by the numerous colleagues whom she mentored and a number of the next generation of librarians, who began as pages working with her. Daphne currently resides in the assisted living section of the Sublette Center in Pinedale, Wyo. 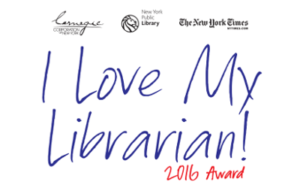 Nominations are open through September 19 for the 2016 I Love My Librarian Award.

The I Love My Librarian Award encourages library users to recognize the accomplishments of exceptional public, school, community college, or university librarians and to honor the ways they are improving people’s lives.

Each year 10 librarians are selected. Each librarian receives a $5,000 cash award, a plaque and a travel stipend to attend the awards ceremony and reception in New York City, hosted by Carnegie Corporation of New York.

Each nominee must be a librarian with a master’s degree from a program accredited by the American Library Association in library and information studies or a master’s degree with a specialty in school library media from an educational unit accredited by the National Council for the Accreditation of Teacher Education. Nominees must be currently working in the United States in a public library, a library at an accredited two- or four-year college or university or at an accredited K-12 school.

Learn more and nominate your favorite librarian at www.ilovelibraries.org/lovemylibrarian.

Johnson County Library celebrated the grand opening of its building expansion last night with a packed house. Library director Cynthia Twing said they expected about 200 people, but had more than twice that number.

“It was an amazing turnout of people last night,” Twing said. “As I looked out over the crowd, I saw people of all ages. I thought this is exactly what this is the library is all about, serving everyone in this community. It was so heartwarming to see that level of support for our opening last night.”

“It was great to see the community come out in such numbers,” Markus said. “The library staff were just glowing. It’s a beautiful building that any community would be proud of.”

The expansion added 10,000 square feet onto the original 8,500-square-foot building. Where once the children’s area was in the middle of everything else and the young adult area was a tiny table in the corner, both age groups now have spaces dedicated to their needs. Local history has been gathered from its formerly scattered locations into one room. The new meeting room is twice the size of the old one, which held 49 people, allowing the library to accommodate larger groups.

One of the features, which was a wonderful surprise for those at the event, is a storybook wall mural located as you enter the children’s area. Painted by local artist Lisa Norman, “It’s really the crowning jewel for the project,” Twing said. “It’s beautiful artistically, and it includes so many elements of storybooks and characters. She’s hidden probably 10 or 12 different things in the picture for people to look for and find.”

In addition to the speeches, sweet treats, lemonade, and mingling, the night included live music, courtesy of local steel drum band Pan Buffalo. “They filled the building with music,” Twing said. “People were dancing and having so much fun. It was amazing.”

The library’s initial facility needs assessment was in 2008. Cynthia said that was when they first started reaching out to the community to discuss the expansion and the funding that would be required. In 2014, Johnson County voters narrowly approved a 6th penny, specific-purpose sales tax to fund $3.7 million of the $4.7 million project. Johnson County Commissioners designated their consensus funds for the remaining $1 million.