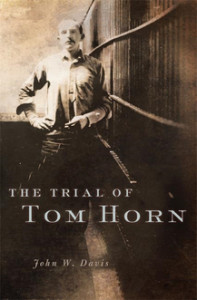 The Natrona County Library in Casper will sponsor a free presentation by John Davis on Saturday, April 23 at 5:30 p.m. in the Crawford Room. “The Trial of Tom Horn” examines the conviction of Tom Horn which marked a major milestone in the hard-fought battle against vigilantism in Wyoming. Davis, an experienced attorney, presents every twist and turn of a fascinating trial, and his account illuminates a larger narrative between the power of wealth and the forces of law and order. Participants will understand what an enormous challenge to democracy vigilantism was in early Wyoming and how the fight against willful cattle barons shaped the history of the state.

John W. Davis is a published author who graduated from Worland High School in 1961, earned a B.A. in mathematics from the University of Wyoming in 1964 and graduated from the University Of Wyoming College Of Law in 1968. He taught Algebra II 1964-65 at the New Hampton School in New Hampton, New Hampshire and served as a Captain, Army Judge Advocate General Corps from April 1969 until March of 1973. He practiced law in Worland for over 42 years, retiring in 2015.